If you have an Instagram account, it’s very likely that you have uploaded, at least, a picture including food, be it your next breakfast or dinner, your diet food, a cake you baked or the food you were served at the last fancy restaurant you went to. However, did you wonder how many Instagram users around the world eat the same as you? There’s a site that can tell you!

Photoworld is a site that lets you know where hashtags for food are more popular. Some friends created it after wondering if they could do something with all the food-related hashtags on the picture-sharing social network. Since foodporn is one of the most used words there, attracting thousands of people (not to mention creative dishes for kids, ill people or people on a diet), it wasn’t difficult to sort foods according to hashtags. 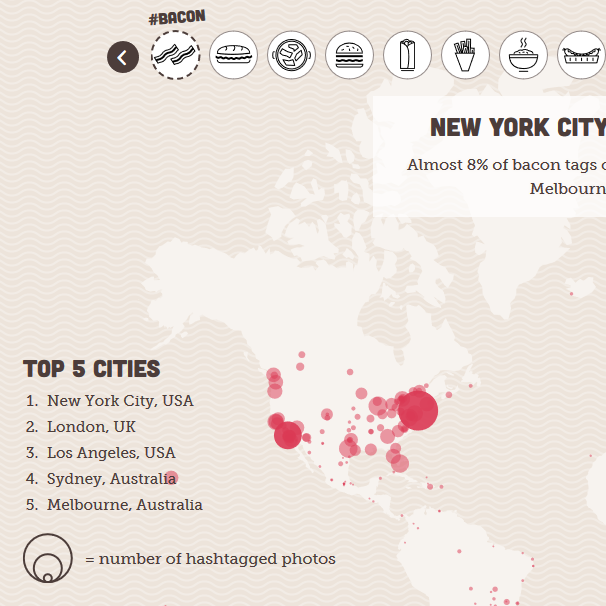 The capitals of bacon. The text box says: “Almost 8% of bacon came from NYC, London, LA, Sydney and Melbourne…”

Not all the photographs on Instagram have been analyzed, but only 100K published between March 10 and March 18 2015 which included hashtags about the kind of food they depicted: hamburgers, burritos, churros, pizza, sushi, xiaolongbao… Up to eighteen world dishes. If we click on any of them, we’ll see where its consumption peaks, both on a world map and on a list of the five places where people tagged it the most.

There are some surprises. For instance, you’ll know that there are more tags for sushi is in the USA, Thailand and Italy than in Japan. Or that India isn’t among the first five places in curry tagging (those being Japan, the UK – of course –, China and Singapore. It doesn’t only show you the country but the city – NYC is the capital of bacon and Bangkok that of macarons.

Quite appetizing, isn’t it?