You may remember Murad Osmann, the man who became famous thanks to his Instagram account (@muradosmann) on which he posted only one kind of photographs. Every pic had the same features: beautiful landscapes, his pretty girlfriend – and his hand.

Both Osmann and his now wife Natalia Zakharova traveled around the world to get those astonishing pics. It all started in Barcelona, Spain, where they were spending their holidays. Natalia was getting tired of Murad’s obsession with his camera, a device that he never put down. While he was holding the camera, she took her hand, and, almost as if it were a miracle, the camera took a shot. That’s where his “subjective” photos started, as he says. He wanted to illustrate their voyages around the world that way.

That was some time ago. Now, the civil engineer (he graduated at the Imperial College, in London) and his girl are already married. And, as you may have imagined, their wedding was not a normal one. The first picture we could see was the one that broke the series, as it was the first one in which Natalia wasn’t holding Osmann’s hand. “#followmeto the wedding with my love @yourleo. I promise to hold your hand and tell you I love you every day for the rest of our lives” was the caption he chose for the photograph of his wife not taking his hand. 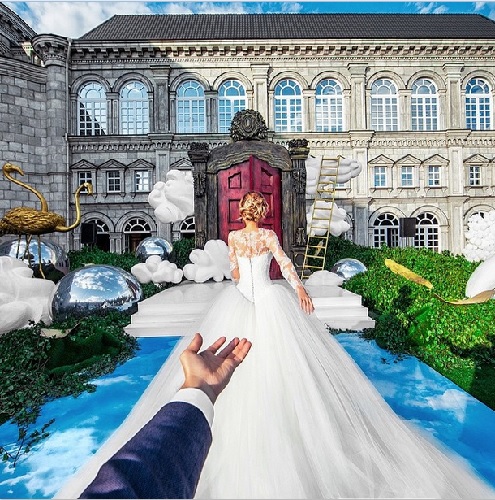 Their wedding was also not a normal one. They were married in a chapel which had been decorated to resemble a fairytale scene, and Natalia was wearing an impressive wedding dress designed by Vera Wang. Every detail matters.

We can only hope they live happily ever after, and that they will go on with their travels around the world, just so that we can see a little of that magic who has joined them together.