Maybe the name Travers Beynon doesn’t mean anything to you, but that is not they way he is most widely known. He goes under the nickname “The Candyman” and, on his Instagram account (@candyshopmansion) you can see his most extravagant side.

It is often said that money perverts people, making them become worse versions of themselves. This may be particularly true for this Greek playboy. Going through his profile is like becoming surrounded by luxury, bizarreness and – especially – women. Almost in every photo on his account can we see more than one women wearing mostly nothing but bikini swimsuits. It kind of makes you think of the Playboy Mansion. Which was also famous for its scarcely clothed young, attractive women. 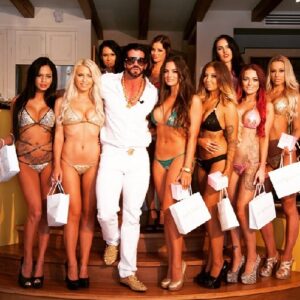 However, Beynon is different from Playboy’s Heffner in that he doesn’t live surrounded only by young, appealing, over-sexualized women – he shares his house with his wife and his four children. Taesha, Beynon’s wife has also appeared on his photos in quite degrading poses, such as being on all fours with while Beynon holds her bikini string as a leash, as if she were a dog being taken to the street by its master.

Her own grandparents have appeared on local TV to beg her granddaughter to leave his abusive husband, complaining about the environment in which their four great-grandchildren are growing up.

It seems that, despite being so worried about nudity and inappropriateness, Instagram won’t terminate this account which stands as a milestone regarding feminine humiliation. However, taking into account that he already has 206k people following him. It isn’t likely that Instagram will delete his profile. As always, if you happen to be rich, the world will forgive your extravagance and not say anything about acts that would be condemned if they were carried on by a normal person.

Instagram’s Most Tasty Side