Paul Rust’s Judy is an Instagram-loved Dog! Paul Rust has become increasingly famous thanks to his appearances on Netflix like the show Love. He has obtained lots of followers on Instagram, but he’s not the only one famous on his own account. He usually uploads pictures of his dog Judy every once in a while, and his followers are completely in love with her. 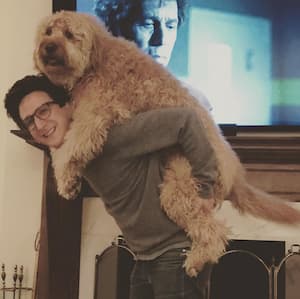 One of Paul Rust’s most recent pictures of his dog Judy.

She’s a giant dog, it’s pretty obvious by the pictures. Sometimes Paul even uploads pictures of Judy next to some of Paul’s friends, and you can see that Judy is almost bigger than they are! But despite her enormous size, she’s still a cute little puppy girl at heart! Her face is just adorable!

But wait, there’s more! In case that wasn’t enough to convince you that she’s one of the best dogs on Instagram, she also gets along with cats. Paul has demonstrated that through pics and videos on his Instagram account, where you can see Judy being super playful with some feline friends. She’s the best!

Some people have asked if Judy is the biggest dog in the world, but we’re pretty sure she isn’t The world record is held by another dog called Frank, who lives in the UK. He’s a 7.6 foot Great Dane and that’s… pretty hard to beat. Imagine all dogs were that big? Wow, no thanks!