We get that everyone makes mistakes when writing every once in a while. Typos are extremely common. But when you’re famous and have thousands or even millions of followers on the Internet, you should definitely double-check everything you post. Especially when you’re sponsoring a product! 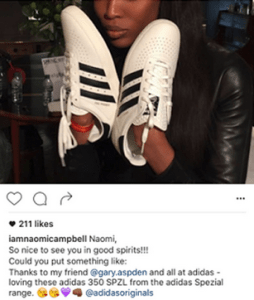 What happened the other day was that Naomi Campbell was given a pair of Adidas shoes in order for her to promote them on her Instagram account. Usually when this happens, they’re also given a certain caption to add to the picture (in some other cases, the owner of the Instagram can add their own). However, she totally forgot to take away the message before the caption, which was part of the email sent to her, making it very obvious that she was sponsoring the product. She didn’t take too long to edit it, but many people have already seen it and taken screenshots.

It’s not as if people didn’t know that most celebrities get paid to sponsor products, but seeing it so crude like that just makes it very weird; it can make some people see Instagram differently. In fact, this isn’t the first time someone has a similar mistake. One other man was sent an email explaining what picture he should post and at what time, and he copy paste the entire email.

So no matter how fast you change a caption, if you’re a celebrity or just have many followers in general, your mistake is probably going to be seen by a few hundreds at least.

Zuckerberg's Paranoia is Getting Us Paranoid