The 20 year-old model Ulrikke Hoyer was fired from a Louis Vuitton casting for “being too big”. This model has worked with oter famous brand before like Versace and Hugo Boss, and this had never happened to her. Not only that, but she is not big at all! 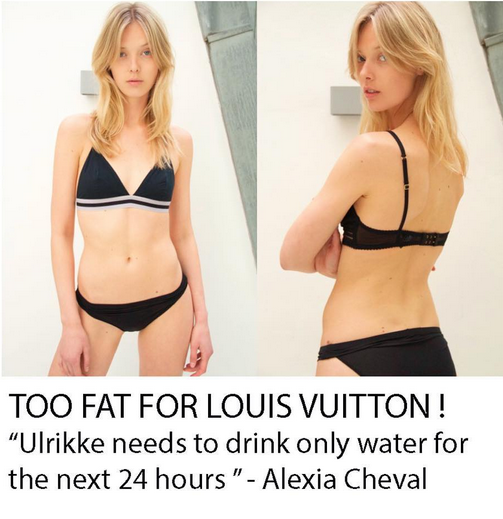 The model took to Instagram to show the world what kind of nonsense is going on in the fashion industry. We is a size 34-36 yet she was rejected for being too big. However, she’s old enough to realize that this is nonesense and doesn’t let that sort of event destroy her. But it could be really harmful mentally and physically speaking if it were the case of a 15 year-old being told that. Because what’s really scary about this is that these models are already very thin.

In the photo caption of the picture sh euploaded, she explains hwo dangerous this industry can be for models health-wise. If she were to have tried really hard to not be rejected, it would imply a very unhealthy lifestyle, starving, etc. Nobody should have to go through that in order to have a job. It doesn’t make sense, you’re not living like a normal human being. You would basically earn money for being hungry and weak.

It’s really great to see how sometimes some models have the courage to take on these matters through social media, it’s a great way to show the outside world how things sometimes work on the inside.