The photographer’s social network is so important that its numerous users pay to buy more Instagram followers and its success has led to the emergence of groups like Instagramers, a community who has users in more than 60 countries all over the world for whom Instagram and its use is almost a lifestyle. Now, Instagramers has put on a fancy with the creation of a fascinating and ambitious initiative: Instagramers Gallery. 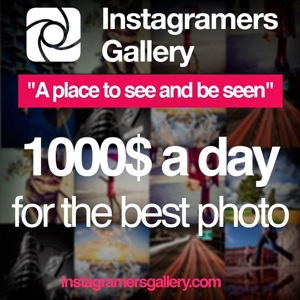 What is Instagramers Gallery? As its name suggests, it is an initiative that consists in the creation of an Instagram’s gallery in which the users can upload their pictures and, every day, the best one will be chosen. This picture, named as the best picture of the day, will receive a cash prize of 1,000 dollars (around 725 euros) and the user who uploaded that picture can be chosen to being awarded with the Instagramers-Photo-Prize to the best picture and the prize of 100,000 euros that come with it.

The pictures will be evaluated by a jury composed by highly respected professionals, who will have a hard task ahead of them, because this initiative is going to have a lot of impact, even more now that it has been blessed by Instagram itself.

This is an attractive initiative and it offers very juicy prizes, so it is obvious that this contest is going to be a complete success. There are no terms or obligations to participate but, to win, we will have to be true artists (and we assure you that there are a lot of those on Instagram).

We can’t finish this article without naming the promoters and ideologues of this attractive initiative, Phil González and Jorge Martínez, who, with Instagramers’s support, have created a highly innovative concept. Thanks to them, the pictures and photographers that would have been gone unnoticed otherwise have now the opportunity to succeed through Instagram and Instagramers Gallery.