The Internet can be a wonderful place to vindicate love for everyone, as it boosts visibility and lets people know you at the reach of a click. Many people have benefited from this, and many charitable trends have emerged from an Internet initiative.

Among those are the ones who are not dedicated to people but to animals. What first comes to your mind when you hear that is probably PETA, famous for its online campaigns advocating animal rights and ways of life that don’t harm them. However, there’s a way to reach people without having to spend big figures on a campaign.

That’s what Jackie Deak Akey did. Her pet, Lil’ Bunny Sue Roux, Roux for friends, is, despite her name, a beautiful cat. She suffers from terminal transversal hemimelia, which made her be born without her forelegs. Thus, she must stay on two feet. Apart from that, her life is normal. And there’s her Instagram account (@lilbunnysueroux) for proof.

She has lived with Jackie since October 2014, as the animal shelter in which she was living had to keep her apart from the other animals, due to her condition. For instance, she couldn’t bury her excrements no matter how hard she tried. In order to help her, Jackie adopted her without a hint of doubt. 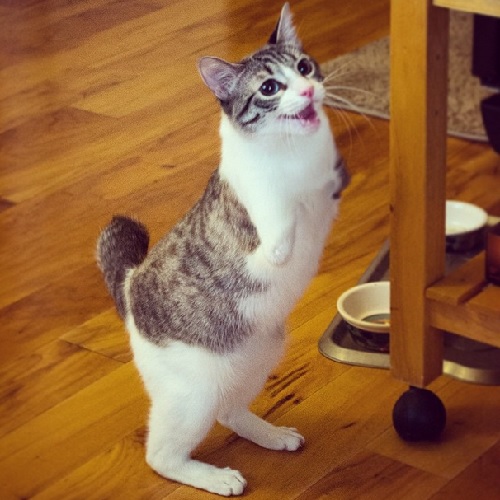 One of the photos of Roux.

Nowadays, Roux can move using exclusively her hind legs and her behind, as if she were a kangaroo. If she wants to move faster, she jumps sort distances. She lives happy and even has two other cats at home, Kona and Graybee, with whom she shares games and fun.

If you’re curious about Roux, check her Instagram profile, where you can see her walking an even jumping incredible high distances using only her hind legs. A truly inspiring example of overcoming through perseverance and effort.