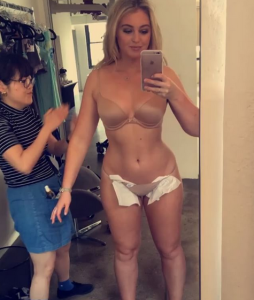 Screencap of the video uploaded by Iskra.

One of the type of accounts that have a huge success on Instagram are those related to the fashion industry. Therefore, not only lots of fashion brands have thousands or millions of followers, but also models for those brands (or freelance models, too). However, the idea of models has been the same for quite some time, and when people see these people, they want to be like them. But every day different models try to make people realize that most of the pictures they see of them are usually retouched with Photoshop, filers and different tricks.

The British model Iskra Lawrence recently uploaded a video to her Instagram account showing her “behind the scenes” of a photoshoot. In her caption she explains that every model, both men and women, have to get very prepared, fixed, dressed and many things before the picture. And even after the pictures are taken, the pictures get “fixed” on a computer. So basically, what you’re looking at isn’t something 100% natural.

It’s amazing how they’re trying to help their followers open their eyes and not get blinded by the modelling industry. Everyone is a human being with a human body with its flaws and perfections. Just because a woman is on the cover of Vogue Magazine doesn’t mean they’re physically superior! It’s just their job.