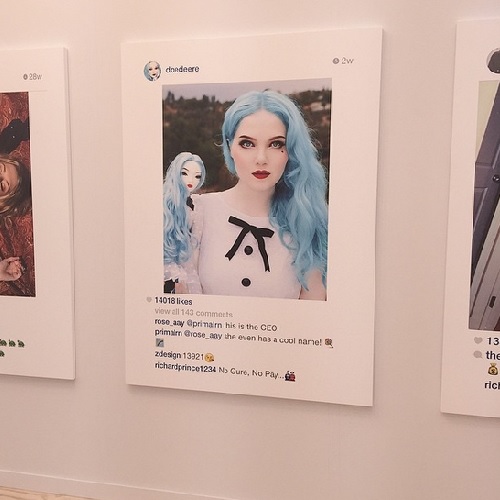 Why should you bother to become a professional photographer when you can be called an artist and make much a higher profit? Ask Mr. Richard Prince, who has found the way to make $100K out of Instagram photos.

However’ don’t let this make you think that he earns that money selling his hard work as an image artist. Not a single cent Prince gets paid for that work is paid to the pics’ original authors. That’s right – Prince may become a millionaire selling stolen works.

Thirty-eight works of art are a part of Prince’s exhibition, which premiered last year in NYC. They are at Frieze gallery and are arousing enormous polemics. What are they exactly? If they were paintings or original photos they would be worth something.

However they are only screenshots printed on a bigger canvas surface – 65 by 48 inches each. What is worse is the obscene price some of them have reached – $90K for a screenshot. Some of the people who originally took these shots are very upset because of that. It is their work, in the end, what is letting Prince earn astronomical figures.

He takes advantage of a law loophole, as using others’ photos posted on Instagram is considered “fair use” in the USA, so he is not obligated to pay royalties to the original artists. He has been enormously criticized by his “work,” but he can be sure that it won’t have any legal consequences.

Among the contents of the “works” are models suggestively posing, topless pics of models and other (breast-covered) celebrities. “Don’t du anything. Just B Urself,” he advises under one of his pics. Stealth, sexism and bad orthography, conveniently signed so no one happens to think about the work of other artists – he kind of has everything one wants to see at an art exhibition…