When we create an Instagram account, we do it because we want to express ourselves and have a place where we can show the world what we love. It would be a pity that someone or something invaded it—unless the invader is someone as Lucas Levitan (@lucaslevitan). This Brazilian artist based in London (he’s been living there for ten years now) has been “stealing” pictures from other users and printing his personal mark on them. No need to worry! 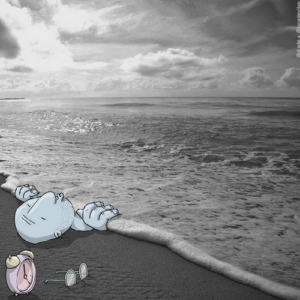 “I steal people’s pictures to create new narratives,” he says. However, he doesn’t steal and repost pictures as anyone on Instagram could do. When he picks a picture that’s pleasing to him, he gives it a new story, new backgrounds. He places his own pictures on them, then proceeds to amaze the ones who took the pics in the first place.

It’s a theft out of love, he tells the BBC, as it is the less damaging way of stealing someone else’s property. He “steals” pictures and gives smiles in return. When he started doing so, he was afraid that his photobombing was received negatively at first. However, not only did that not happen, but his works were cheerfully received.

In Levitan’s own opinion, his cheerful, light works don’t make people angry – rather than that, they create a sort of intimacy with the original photographers. When people see their works modified, they know it’s in a humorous way, so they react  kindly. It’s not as their work would be stolen out of the blue.

He’s even created a hashtag, #IWantToBeInvaded, in order that people would upload photographs that they would like to be photobombed. “I had never thought Instagram would be such a boost for my work – I thought it was the best place to hide an image.”

Well, he was definitely wrong about that.

Your Foodporn Could Get You into Trouble