Instagram is known for its attitude towards clothing and nudity. In fact, no nudity is allowed on the site and pics containing the slightest peek of nudity get always removed from the site. However, there have been attempts to cover them using even emoticons to tag them, but Instagram always finds.

But this time the polemics didn’t arise because of a lack of clothing – but an excess of it. Not on the part of the social network, certainly, but amongst public opinion. The cause? Khloé Kardashian, who uploaded a pic on her account of her wearing a niqab. It may seem shocking, as the Kardashian women are mostly known for their lack of clothing, not their excess.

The pic, however, is justified. Last week, Kim’s younger sister was in Dubai. The only text to appear with the pic was “Habibi Love”. Habibi or habeeb means “dear,” “beloved” in Arabic, and it almost surely refers to Khloé’s partner, Moroccan rapper French Montana. 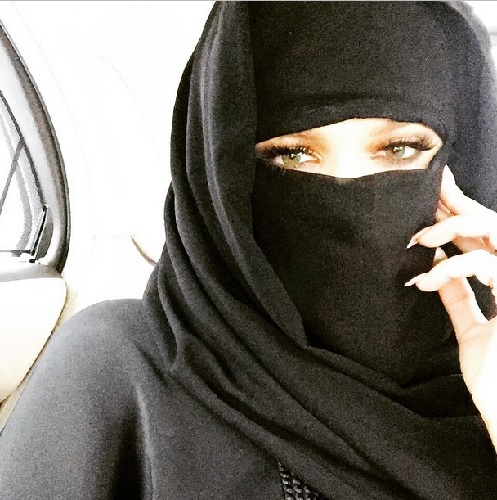 The origin of polemics

A declaration of love constrained by circumstances got to arise polemics, but it is not strange to see Khloé’s head covered with a niqab. Dubai is the capital of the United Arab Emirates, where Sharia (Islamic law) is enforced. Dubai’s anti-indecency laws say that no one must reveal too much skin through their clothing. That explains why Khloé’s head is covered. Not only that, but she surely also couldn’t even give her partner a kiss, as kissing in public is strictly prohibited.

Despite the circumstances, numerous people on Instagram have commented the pic, saying that it will surely make other polemics start. Another example of the ignorance of people. However, it makes no justice just to talk about the pic. Kardashian doesn’t look worried about her niqab. And that’s what matters, in the end, isn’t it?