Melissa Wilbraham (@melissajeanbabies) is a professional photographer who works for the Sunshine Coast Hospital in Queensland, Australia. The same week that the World Breastfeeding Week is being celebrated all around the world, Instagram banned Wilbraham’s account on the grounds that it included nudity and/or pornography. When will the debate over breastfeeding be over?

Moments of intimacy between a mother and her newborn child are one of the most beautiful things in the world. The fact that newborns can only feed through their mothers’ breasts creates a unique bond between them. However, given Instagram’s strict Terms and Conditions, which have lead them to delete and delete hashtags if they detected a hint of indecency, it’s not strange that the Australia-based photographer has been banned.

What can we find indecent in Wilbraham’s Instagram account? Laughter and smiles, no matter if they come from mothers or children. Absolutely nothing sexual. Dissociating nudity and sensuality seems to be quite hard for the photo-sharing network’s censors. Even breastfeeding, which technically doesn’t depict those scaring nipples, gets banned from Instagram. 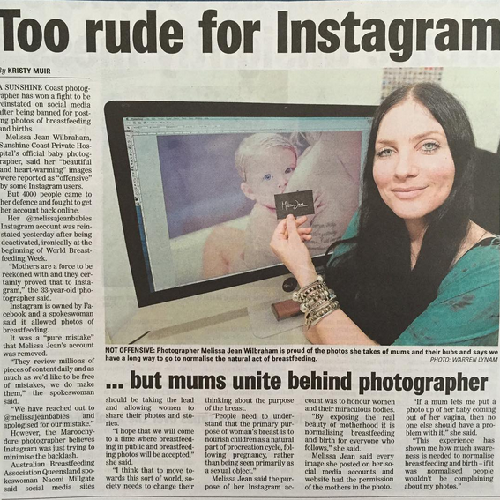 Wilbraham even got to newspapers with her story

Joking apart, Wilbraham’s account also fights for the empowering of both women and men, so that they’re not ashamed of their bodies. Giving birth and breastfeeding are treated by Melissa just as the things they are – natural processes which create unbreakable bonds between parents and children. There’s also room for doctors and nurses who help those babies come into the world.

How did this story end? Wilbraham got her account back, since it got support from all over the world and even made it to quite a few newspapers. Almost thirty thousand followers follow her – that must be a good sign. Yesterday she uploaded a photograph of an article telling her story to the world. And, as long as new babies keep being born, she will go on telling it herself.