People aged 60 or more are surely not the main target of Instagram, and certainly not the ones who upload more pics. However, that may change as the younger generations get older. For the moment, a Spanish Instagram account collects pics of fashionable elderly men and women having a good time.

María Moldes started this trend some time ago (in fact, her account @mariamoldes was considered one of the best profiles of 2014 by the BBC), taking pics with her cell phone (in fact, an iPhone). What does she takes pictures of? Mostly old people. It’s not that she takes mere portraits of old, anonymous people on the streets, but that she manages to give her pics a kitsch look that has driven her 7,000 followers crazy.

Her photos are always bright and colorful, no matter that they’ve been taken on the beach or on a street. If you remember Almodóvar’s kitsch aesthetics, you’ll find pleasure in this account. Stares, hairstyles, high heels, graffiti, plastic pearls and fashion magazines, all are present amongst Moldes’ pictures. 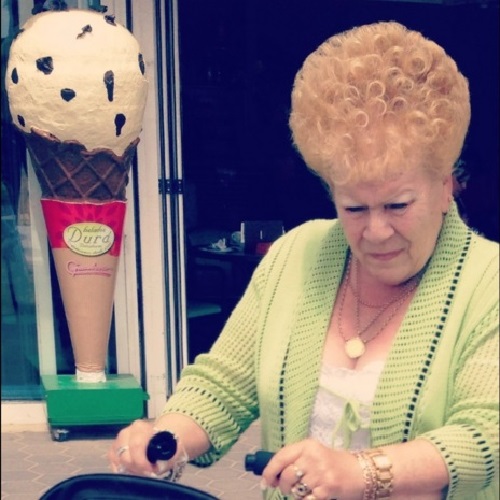 Weird hairdos and ice cream cones – what else could one ask for?

One of the most special features of the pics is that every single one of them has been taken using a cell phone camera, which made her enter a specific category in the BBC report mentioned above. What started as a personal project (she earned a scholarship which let her make it real) has developed into contact with a lot of photographers around the world.

It is not that her pics are professional, she says that herself, but they have some kitsch, colorful magic and they show the most cliché’d sight of Spanish older people: long nails, extravagant hairdos, caramel-looking skins and showy jewellery.

Moldes will keep with this project as long as it is fun for her, which, we hope, will be for very long.

Why entrepreneurs post stories and does it help them to expand?