Ex-Cutest Couple on Instagram Now Fight? Alexis Ray and Jay Alvarrez were declared Instagram’s most famous couple by several sources. They were best friends, soulmates and travelled together all over the world taking incredible pictures in amazing places. Everyone wanted that relationship, everyone wanted to be them. 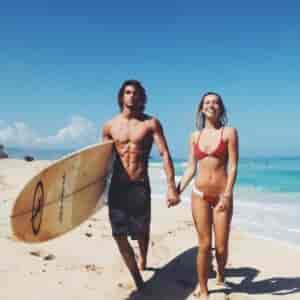 Alexis and Jay, Instagram’s most famous couple.
Lots of famous brands wanted them to promote their products, and they really started to become famous when the clothing brand Pull&Bear got them to do a new season’s bathing suit ad campaign. Their Instagram were full of perfect pictures of them travelling different places of the world, looking stunning in every shot. Everyone wanted their life, everyone wanted to be like them. Some people even claimed their life was too perfect to be real, that is just had to be staged.

Be it as it may, it seems like this perfect Instagram couple has broken up. And not just that, but it seems that Alexis isn’t very happy about it, and body shamed Jay publicly on the internet. This is pretty inappropriate, not only because body shaming is wrong, but because there are millions of people who follow her and look up to her, and a percentage of those followers can be influential people that can think this sort of attitude is OK.

Jay Alvarrez responded to Alexis’ post and claimed that body shaming is wrong and that what she did was totally wrong. Who ever thought such a famous and influential couple would end up having a small “Internet fight”? Especially since they both have so many followers! Let’s just hope this doesn’t go to far and at least have them both still upload gorgeous pictures on Instagram, even if they’re not together anymore.