Yesterday, Monday 24th March 2015, Instagram released the new app called ‘Layout’ on the IPhone app store.Layout is an app that creates photo collages from the images saved on their iPhone camera roll. 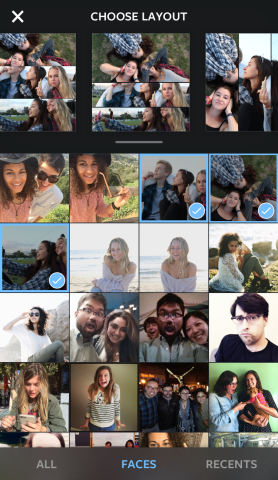 Users of Layout can create these visually attractive collages and save them to their phone, and then can share them directly onto Facebook or Instagram, and some other online sites.

As of now there are currently 10 different, unique collage layouts or formats to choose from, depending on how many photos you are sticking together. Users can have up to 9 photos on the one collage.

In the last 12 months, this is actually Instagram’s 2nd creative app that they have released; Last August the launched the Hyperlapse app which function is to create time lapse videos that can be saved on your device or shared on Instagram.

The reason Instagram launched both Hyperlapse and Layout is in hope that users will post their collages and time-lapse videos onto Instagram. Giving users a new way to create content will give them more reasons to use the social network more frequently.

However, photo collages on Instagram are hardly a new thing, in fact, 20% of the 300 million active users of Instagram currently already use one of the many 3rd party collage creating apps, such as Instaframe or Pic stitch, according to a spokesman for Instagram.

The Layout app is attempting to stand out from those 3rd party collage apps by including new features such as; being able to retrieve all the pictures from your camera roll that include someone’s face, they included this feature because studies have shown that 90% of all collage photos that have ever been shared have faces in them.

The app also includes a useful photo booth function that will rapidly take 4 photos in quick succession, and you can mirror images easily with it.

Layout, is available for free from the Apple store using any ios device

You can get real likes, followers or relevant comments on our site insta4likes.com

Uploader App For Mac - Upload Photos To Instagram From Desktop